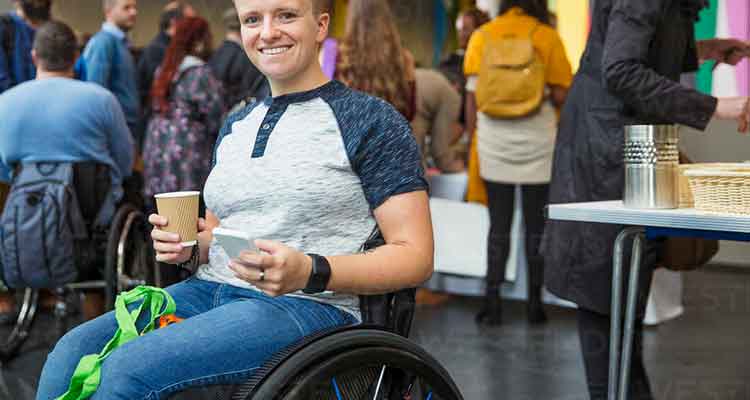 Born in1982 in Melbourne, motivational speaker and Christian evangelist Nick Vujicic began his inspirational talks while at Griffith University.

Born with neither arms nor legs because of a rare genetic disease, Nick was inspired by a newspaper article about a man who thrived despite a severe disability.

Nick had to small appendages—one with fused toes.

Doctors were able to separate the toes.

Nick used the toes of his “chicken drumstick foot” to operate an electric wheelchair, a laptop computer, and a cell phone.

After graduating with a double major in accounting and financial planning, Nick brought secular messages to groups worldwide through “Life without Limbs” and “Attitude is Altitude.”

At eleven, Oxford-born Hawking’s IQ was listed as higher than his hero, Albert Einstein.

He advanced our understanding of time and black holes, shaking the world of physics.

Stephen Hawking made complicated scientific theories accessible to everyone.

His book A Brief History of Time sold over 10 million copies.

Hawking also wrote a series for children co-authored with his daughter, Lucy.

Despite severe physical limitations from Lou Gehrig’s Disease, which resulted in his 2018 death, Hawking faced the world challenges with a keen wit and mobility/voice technology that helped him communicate with a world that cheered his accomplishments.

Born in 1980, activist Muniba Mazari Baloch was known as the Iron Lady of Pakistan.

She is an artist, a motivational speaker, an anchor, and Pakistan’s first model.

At twenty-one, a car accident left Muniba in a wheelchair.

She became the National Ambassador for UN Women Pakistan.

Born in Hyde Park in the Hudson Valley in New York state in 1882, Roosevelt was the twenty-third President of the United States.

Despite polio that left him in a wheelchair, instituted New Deal policies that swept into landslide re-election.

FDR will be best known for increasing employment and providing support for the poor.

Winner of the Presidential Medal of Freedom, Helen Keller was the first deaf/blind person to earn a bachelor’s degree.

Other challenged individuals were inspired by her 1903 biography, The Story of My Life.

Heller also published twelve other books, including Light in My Darkness.

Perhaps you recognize Ralph Braun’s name on the hundreds of Braunability devices.

To those of us in wheelchairs, Braun’s wheelchair-friendly devices are a godsend.

In 1963, he started “Save-A-Step” manufacturing, where he built the first motorized scooter.

In 1966 Braun created the first wheelchair-accessible vehicle with a lift and hand controls.

His work in the bargaining solution is still cited. “A Beautiful Mind” is based on his life.

Before disaster struck, Sudha Chandran had a career as a world-renowned dancer.

A car accident resulted in the amputation of her right leg.

While tragic for a dancer, it resulted in her switch to a career in acting, where she won several awards.

At age six, she was bed-ridden with polio.

Then a car accident damaged her spine and pelvis.

Despite her disabilities, her work had a huge impact on Mexican art.

Loss of her leg when she was pushed off a running track did not deter her from mountain climbing.

She has climbed Mount Kilimanjaro in Africa, Mount Kosciuszko in Australia, Mount Elbrus in Europe, and Mount Aconcagua in South America.

The star of the stage and screen. His broken neck left him in a very fragile state.

His memoir, Still Me, tells of his regaining a sense of purpose.

He started the Christopher Reeve Foundation working with the American Paralysis Association to research and advance spinal cord injuries.

His life took a sudden turn when an accident caused the amputation of his right arm.

He is searching for stories of individuals living with disabilities in poverty-stricken communities.

Gradual deafness left the successful young composer with a chronic, incurable illness that robbed him of his ability to hear his timeless compositions like the Razumovsky Quartets.

Born in 1956, journalist and author Hockenberry was paralyzed from the chest down due to a car accident.

This did not stop him from reporting from all over the world.

His stories covered a wide variety of topics in several media. He was a highly regarded, award-winning broadcast and radio journalist.

Marlee Matlin is well known for her work in acting.

However, she is also a force in her advocacy for deaf people.

Ms. Matlin has the distinction of being the only deaf actress to date who has won an Oscar.

This has not stopped her from competing—and winning medals –in such events as the five-hundred-meter race, cycling, and running marathons.

Ms. Runyan was born in California, where she earned a degree in teaching deaf-blind children.

When Parkinson’s struck at age twenty-nine, Michael threw himself into building awareness and funding Parkinson’s research.

These 17 successful people are proof that famous people with disabilities see themselves with abilities and some challenges.

People like Christopher Reeve were so much more than famous people in wheelchairs.

They are not incapable.

Many of them have taken up the challenge that life dished out to them and turned it around. For some, their adversity became a calling.

We can do our part by seeing the person, not the disability and giving every person we meet a chance to be a star.